The Fastest and Most Profitable Gathering 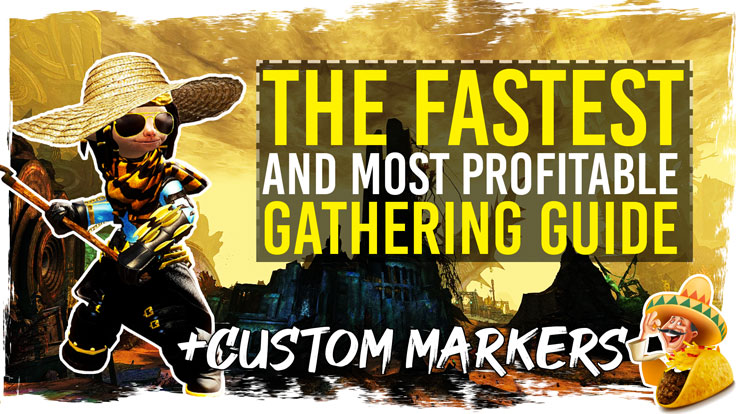 Optimize your gathering. Make it as fast, and as profitable as possible with this quick guide.

Gathering resources is quite an important task here. Not just for the crafting ingredients but also for various currencies needed throughout the entire game. The annoying part is that it takes time. So in this guide, I will give you some tips that make gathering as fast and profitable as possible. There is plenty to cover, so let's get started.

You save the most time by knowing where those nodes are and not spending ages running around in circles, trying to find some.

I've spent a lot of time making efficient gathering routes for all the zone resources. Just follow them, and you will save a lot of time.

When it comes to speed, you have to count the time you spend traveling between nodes as well. And there is no better way than using mounts. Which one is the best often depends on the terrain.

Get Loads of Quickness

Gathering speed can be accelerated as well. We could begin with Quickness, which reduces mining time just as it does for skill casting, but not every class has good access to it.

Another thing that affects gathering speed is the gathering tool, and by that, I mean the Unlimited ones from the Gem Store. There are plenty to choose from, but don't look for their effects since you can modify them with different glyphs, but for their animations.

I know they can be expensive but definitely worth it in the long run.
Everyone does the math on how many nodes you have to gather to pay them back, but no one considers the time you save.
You can also use your Shared Inventory Slots and quickly swap those tools between multiple characters.
Just make sure they have some tools already equipped, so you can simply double click like this.

The gathering is not just about speed. You can also squeeze some bonus items out of each node.

Another bonus yield you can get is rare material provided by Guilds Tavern and Banner buffs. The description is quite deceiving, and its functionality is still a bit of a mystery.

And finally, we have Glyphs. They work just like Runes or Sigils but go into the Gathering tools.